The Glory Train is Moving 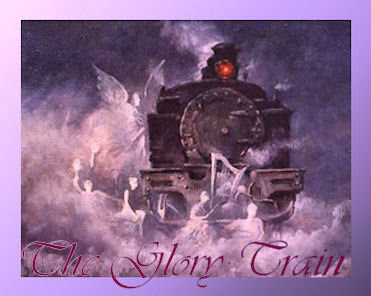 Last night during worship at Church I got a clear vision of change that is taking place. As you know a month ago there was a shift and it's continuing to manifest.

I saw a train in the Spirit. It started a while ago from the station chugging up the track. There had been times when it had struggled to pull out of the station and had been stalled. Steam wasn't sufficient. Not enough fire in belly. Water was short. But now the train was moving;l faster and faster. The track ahead is being cleared of obstacles and saboteurs by forerunner troops. On both sides of the track are other tracks with trains that have fallen off the tracks. They lay damaged and immobile. Only this train is making progress, moving ahead. Others who had been trusting in the other trains are seeing that this one will take them were they always wanted to go. They are climbing aboard. They are shoveling coal, Pumping water, turning up the heat. The engineer knows this track. He has been this way before. Like in many train oriented war movies the enemy is trying to derail this train but there are advance troops clearing the way and repairing the track. People that stand near the train feel the rumble in the earth as it passes by. As it gains speed it becomes fierce and unstoppable. It's the only train going where they need to go and it will not be stopped. A seemingly dangerous time comes and people question the route, but the engineer adds coal and water and the train blows thru what seemed to be a significant barrier. Some on the train look at others adding coal to the hopper and water to the boiler and wonder if they have the authority to do so. If they are of the right coal shoveling - boiler filling union. The engineer quiets them and points to the track ahead. Forward He says. This is the way. Shovel and Fill and don't' worry about others who are filling beside you. Bring your burdens on this train, I will carry them, you can rest. The train is on the move, the weight of HIS Glory is being revealed. You can feel it in the earth. Get on Board.

I won't over-explain but the derailed trains are the world systems and governments that have failed, gone off the tracks. People who trusted in them are grounded. The Glory Train is the only thing moving and they are getting on board. There are saboteurs but they are being silenced and neutralized as the Glory builds momentum. Those who worry about who is or is not helping the train move are being told to pick up a shovel and a jug of water.

All Aboard. The Train is Moving.
Posted by Gene at 9:19 AM

Wow, a few years ago I dreamed I was on a speed train where God was the Conductor. We paused due 2 a tangle of steel placed on the tracks by the enemy. God used DSP, Digital Signal Processing, 2 enable us 2 pass right through it. We traveled N by NW 2 Washingtom state overnight 2 a beautiful land.

was just thinking bout train....cause man prophesied over me that a train was coming....