I heard the Lord Say... Don't Love what I hate

I heard this early this morning. It disturbed me.  God is calling those in the office of Prophet to draw the line between those who have by their actions and omissions chosen to be enemies of God by embracing evil; and those who are the Friends of God.  It may not be where you think and some reading this are on the wrong side of that line.  God Hates.  You may be one.  Read on.

Hate seems inflammatory in the Christian World.  God is Love.  We hear that.  It's true.  This weekend is the ultimate commemoration of his love.  But there ARE things, and even people, that God hates.

It's hard to understand this if you are under the illusion that God is ever loving.. no matter what.

He said to us thru the Apostle John in 1 John 2:15  -  "Do not love the world or anything in the world. If anyone loves the world, love for the Father is not in them".

If we are to NOT love the world then what was that John 3:16 thing all about.  God so loved... the catch is "whosoever BELIEVETH",  The problem is we have somehow watered down the Gospel to include just any living breathing soul to include this. Yes, it's all available some are by their own volition, ENEMIES of God until they come to Faith in Him.

"For if, while we were God's enemies, we were reconciled to him through the death of his Son, how much more, having been reconciled, shall we be saved through his life!"  Romans 5:10


God says Love your enemies and he demonstrated that.  But there are things, actions and people that God hates.  We must not allow our compassion and desire to go along to get along dilute a clear demarcation between what God calls evil and what God calls good.  We are engaged in a real battle in the spirit in our nation right now.  It looks like God might lose... He won't but because of misled deceived Christians avoiding confronting sin, satan will advance.  The restraining influence has been withdrawn.

2 Thessalonians 2:6–7 And you know what is restraining him now so that he may be revealed in his time. 7 For the mystery of lawlessness is already at work. Only he who now restrains it will do so until he is out of the way.


You know something has become unrestrained when it comes loose, falls off, breaks free, runs wild.  We are there now.

There are things that God hates and he encourages us to hate these things as well.  No only the actions, but those who promote and support them. It is no longer just "Pray for Him or Her", David when facing the blaspheming Philistine Giant Goliath didn't pray, "Lord turn him from his evil ways".  He slew him.  He faced him down.  He took him on. It's time for the house of David to once again in the name of the Son of David proclaim and openly oppose the evil that has invaded our land and blasphemes the name of the living God.

Let us look at our role in this hatred:

Proverbs 8:13The fear of the LORD is to hate evil; Pride and arrogance and the evil way and the perverse mouth I hate.


The fact that we don't hate evil, pride and arrogance is evidence that we do not fear God.  We tolerate it in the name of a false love.  The Love of the world has consumed us.

Proverbs 6:16-1916 These six things the LORD hates, Yes, seven are an abomination to Him:
17 A proud look, a proud look speaks of a person who would want his or her will above the will of God and the will of others. It speaks of people who are arrogant and full of themselves.
Did you know that pride was the first sin ever committed? Even before Adam and Eve ate the forbidden fruit, the sin of pride was committed by Lucifer. He wasn't satisfied to be an angel serving the Lord. He wanted to be God. And God banished him because of his pride.
A lying tongue,  Using flattery, fantasy and imagination to get ones way or persuade others to evil.  Those who allow lies to go unchallenged are as much as endorsing them.  Love is not passivity.
Hands that shed innocent blood, This is the sin of Abortion and Murder that God HATES today.  Yet many by their silence or even their endorsement at the ballot box and other places have become partners in the hands that shed innocent blood and as such are hated by God.
18 A heart that devises wicked plans, These are the plans that Men create which are intended to put other men in bondage.  No plan is without wickedness when it takes freedom, blood or resources from one to give to another.
Feet that are swift in running to evil,    When you hear anyone say, "we have to do something" or "we have to do this right now"... it's running to evil.  Without the capacity to make simple singular sound decisions based on all the evidence means we have no hope of being able to avoid the evil that lurks in the hearts of men that would bring us to that end.  When you hear cries of HASTE.. hate it.  This is the call you hear today regarding same sex marriage.  A concept not yet 15 years old, but we are being urged to move ahead quickly in overturning something in place for thousands of Years.
19 A false witness who speaks lies,   There is overwhelming in our culture today and God hates it.  People who are Godly are portrayed as evil,  people who do evil are portrayed as good.  Our news media, our television and movie programming has this meme constantly.  We now see evil as good and good as evil  Worse than that, the false witness is being taught in our schools.  Kids are being told that the good guys were bad and the bad guys were good.  It's all upside down.  The false witness has hobbled a generation unable to discern good from evil... so evil reigns.
and one who sows discord among brethren.  We cannot win this fight against the evil one on our own. We must be unified.  Yes, some that I lock shields with may not agree with me one every Jot and Tittle... but if we agree on our mutual enemy, it is enough.  God is not concerned with nuance as much as the unity that brings victory.  I often rail against those who would spread disunity among the Body.  Pastor Phil talked last night about Discerning the Body... that may be wider than we think but some who would claim they are... are not.  Discerning is the key. 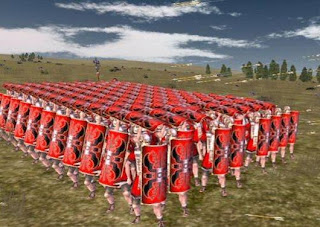 IF anyone who would do battle are or were supporters (traitors) against the purposes of God in light of what He hates, they must first repent of their gross sin, turn from their wicked ways and begin to march toward the light... or we will die.

Will you fight or compromise in your love for the world?

would you mind if i reposted this blog on my blog? very good, timely and well written. of course have your info on it. please email me st michele@wantinsight.com.