Of the Photo of Rain over Miami

Gene: I photoshop most of my photos to correct color, increase contrast, crop, etc. I think what you are asking is whether the photo is real, and the answer is yes. I took it last Thursday night. This was a ten-second exposure, so what you see is cumulative rainfall over ten seconds. It’s real, but it’s not the same thing that the naked eye would see, or that a camera making a much shorter or longer exposure would see. Still, it’s not so different in appearance (as my imperfect memory remembers it) from what I remember seeing. It was such a striking visual event that as soon as I noticed it (I was bicycling along an esplanade) I decided that I should stop at once to photograph it before it disappeared.

Here's how it appeared BEFORE I photoshopped it... 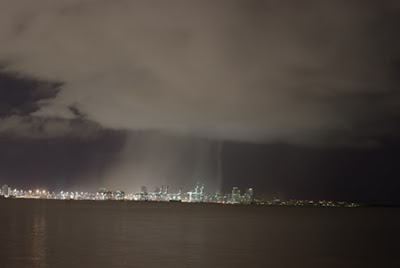 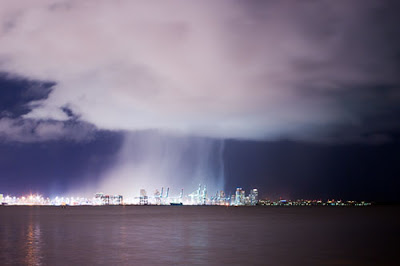 The original photo is just as beautiful.

The heavens do so declare the glory of God...

Beautiful. Capturing on film , what is captured in our hearts is not always easy... so glad for the technological advances that allows us to magnify what we saw with our heart though it does not appear the same on film. At least we can bring it a little closer to what was sealed in heart... and spirit.