I do not embrace nor denounce these prophetic writings and pronouncments.   They are interesting.  They seem to be saying the same thing.  I have been watching this.  It is interesting that as I spent the night right on top of the place where this is supposed to happen, I had a prophetic download.  So, I think it's worth reading, if only to be aware. 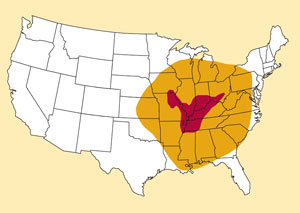 Several different prophetic ministers have received warnings from the Lord over the past several years regarding a major earthquake, which will hit the heartland of America. Most of the prophetic words connect the earthquake directly to the judgment of God for America’s role in pressuring Israel to divide their land.


Major Earthquake Coming to the Heartland of America
Posted by Gene at 11:55 AM

No one knows the time or the day. If you would like to see a more intricate map look at a.a. allens as it would seem for years people may be seeing parts of what He saw.