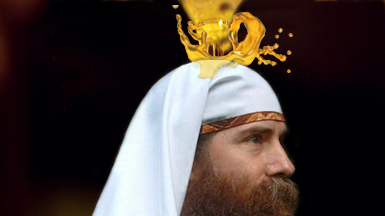 In a dream Bob had he was shown that 45% of church leadership were JUST and living a righteous life. However they were not accomplishing much because these leaders were not coming together in a common union or in agreement with one another.

1Behold, How good and how pleasant it is for brethren to dwell together in unity!
2 It is like the precious ointment poured on the head, that ran down on the beard, even the beard of Aaron [the first high priest], that came down upon the collar and skirts of his garments [consecrating the whole body].
3 It is like the dew of [lofty] Mount Hermon and the dew that comes on the hills of Zion; for there the Lord has commanded the blessing, even life forevermore [upon the high and the lowly]. (Psalm 133:1-3)
When these leaders can come together in a common union they will determine the direction of this nation. They need to take communion together and agree on what they can agree on. When they come into unity with one another and in agreement with the Father, He will establish their word as it is decreed.

You shall also decide and decree a thing, and it shall be established for you; and the light [of God's favor] shall shine upon your ways. (Job 22:28)

Until the dedicated Christian leaders come together in intercession for this nation, the Lord will not heal the land.
If My people, who are called by My name, shall humble themselves, pray, seek, crave, and require of necessity My face and turn from their wicked ways, then will I hear from heaven, forgive their sin, and heal their land. (2 Chron. 7:14)
It’s time for the church leaders to get a vision for world evangelism. This can only be accomplished by the leaders coming together in a spirit of unity. As leaders unite with each other and allow the Holy Spirit to lead them, then the body of Christ will also come into joint unity and function as one body in Christ.
There’s a body of believers who have been in a season of intense training and preparation for the past three years. This year, 2012, they will begin to be sent to the nations.
The teaching below is Bob’s revelation of the first chapter of Ezekiel and is explained in the 2012 Shepherd’s Rod. It describes how the dedicated Christians have matured and advanced in the past three years and are now prepared to go to the nations.

This is the Year of the Man
From 2012 Shepherd’s Rod
“2012 is the year of the MAN. If you study the first chapter of Ezekiel, you’ll see there are four creatures; the ox, eagle, lion and man. They each have the face of the man and he is the only one moving. This year the man walks forward in conjunction with the Holy Spirit.

And they went every one straight forward; wherever the spirit would go, they went, and they turned not when they went. (Ez. 1:12)

To recap the past three years prophetically; things began to really shake in this nation in 2009 and I saw that it was the year of the OX. It was one of the hardest years that people in the church would go through. The ox plowed all year long over burned out ground not knowing why and it was drudgery. 2009 was a very hard time!
2010 was the year of the EAGLE! It was the year that the eagle returned to the Son; it was a new beginning. The eagle learned how to escape its enemies that year by turning to God. We didn’t have an understanding why the ox in 2009 had not plowed fallow ground or ground that had produced in the past. The ox was plowing new ground that had never been used before. The plowed ground had new energy and would last for centuries. This new ground that he was plowing was evangelism and it began with the labor of the ox.
The eagle came forth and sowed the seed. If the eagle sowed the seeds in unplowed ground they wouldn’t come up. The eagle had all the seeds it needed to sow in the plowed ground to begin the harvest. It was a time of the changing of the eagles. They sowed the seed to the church that went into all humanity. Much of that seed went into the youth that were being saved. This was the beginning of the harvesters preparing to come forth in the following year.
2011 was the year of the LION and things came into order and power. The lion possessed great authority and I believe we began to see a recovery of the eagle bringing fresh revelation to the church. He ruled as king with authority over powers, principalities, thrones and dominions. The lion refused to be distracted by the enemy as he made strides for the kingdom. The lioness was bold and courageous as she moved into her rightful position beside her mate. The enemy did not intimidate her and by the Spirit she led her young. These young ones will become the harvesters that will rule with the authority of the Lion from the tribe of Judah.
In 2012 the man will be sent to the nations. He’ll go forth in the nature of the ox being the servant and the sacrifice. The man will also move in the nature of the eagle having the prophetic vision, the seed, the motivation and the direction. He’ll move in the authority of the lion with great signs and wonders, especially power evangelism beyond anything we’ve ever seen before. This man will be moving with all these natures and will take them to the entire world.

Ask of Me, and I will give You the nations as Your inheritance, and the uttermost parts of the earth as Your possession. (Psalm 2:8)

These men will form great armies and move in one accord; they will not break rank. (Joel 2:7b) They will come together in the nature of Christ and march as Joel’s end time army in the love of God.
I believe that 2013 will begin the greatest harvest of all time, which will continue to increase. By 2017 I believe there will be a harvest so awesome that man has no idea how to comprehend what it will be.”
As an ending note, the body follows the head and the head of the church must be Jesus Christ; our firm foundation. When church leadership can come into unity with one another submitted to the leading of the Holy Spirit of Truth and lay their agendas aside the body will flow in unity with one another to finish the greater works Christ died for.

It is like the precious ointment poured on the head, that ran down on the beard, even the beard of Aaron [the first high priest], that came down upon the collar and skirts of his garments [consecrating the whole body]. (Psalms 133:2)