I copied this. I don't fully buy into ALL of this, but some of it is sobering. It is important that we not be ignorant of the enemy's schemes. I am convinced that many are. SO, this is just a list of some things to keep an eye on. I DID NOT write ANY of this. If you have an argument...see the author. I don't embrace this, I offer it as someone's observation... 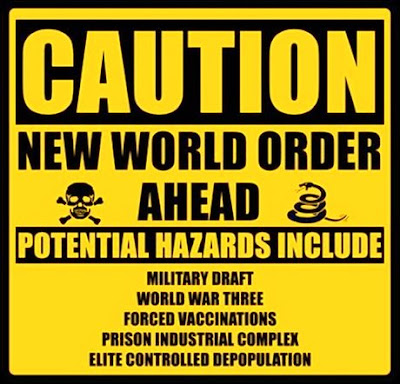 · More New World Order (NWO)/New Age events are being planned for 2012 – unprecedented.
· Fall 2012 – Rome, Italy – 300 top spiritual leaders representing the world’s religions are meeting to draft a plan for a new global consciousness and a NOW. Vatican, Dalai Lama, New age leader Barbara Marx Hubbard are among those represented.
· December 21-28 – Worldwide Occult Meditation Festival – groups all over the world meeting to bring about a global transformation to bring about a new birth of the world and is called “Birth 2012.”
· December 22, 2012 has been declared by the occult world as the unveiling of the New World Order.
· Occupy Wall Street (OWS) supports one world socialist financial system, backed by atheist billionaire George Soros, and has a goal to bring about worldwide unrest and instability in the nations’ economies in order to establish a new financial system and global currency. They are being backed by big labor unions and have close ties with the White House.
· The Pope recently called for a one world agency to establish a world financial system.
· Mikhail Gorbachev, former leader of the Soviet Union, is supporting the OWS movement and is calling for a one world government. The late John Paul II was a close friend of Gorbachev and was in favor of a one world government and economic system.
· The OWS movement has added a “spiritual dimension” by adding “sacred ground” at their sites. Buddhists, New Agers, Occult, and churches have joined forces to provide a “spiritual dimension” to the movement. The only group to be excluded is JEWS!
· The 2012 Summer Olympics in London is being hailed as an occult/New Age event. I believe that profound “deceiving signs and wonders” may occur at this event. The Olympics is based upon an ancient Greek celebration of Apollo or “Apollyon.” Apollyon is the angel of the Bottomless Pit and rises and brings a plague of locusts that resemble war horses with crowned human faces and having women's hair, lions' teeth, locusts' wings, and the tail of a scorpion in Revelation 9: 1-11. Apollyon is Satan himself.

THE ECONOMY
· Gerald Celente, a top US economic expert, who accurately predicted the economic crash of 2008, recently stated that the US economy is collapsing in front of us. He predicts that it will completely crash in late 2012. The current US debt is now equal to 100% of what the nation is producing in one year!
· The true US unemployment rate is actually 15% or higher, not what the government is stating. The true rate for Canada is 14%.
· The Bush-era tax cuts are helping to keep the fragile US economy afloat. These will expire the March 2012. If not extended, federal, state and local taxes will rise sharply, dividend tax rate will soar from 15% to 40%, the capital gains tax will increase 25% and the estate tax will rise from zero to 55%!
· A total of 15 Euro zone nations were warned of being downgraded by the S&P recently. Middle of January 2012, nine were actually downgraded from AAA status. These included France and Austria. Spain, Italy, Greece, and Ireland are nearing economic collapse. Iceland’s economy has fallen apart.
· Calente recently warned that criminals are in control of the US government. In 2012 he warns that they will create a “catastrophic event” or go to war in order to disguise the economic collapse. It will be blamed on the “event” and thereby create a diversion to divert public anger away from them. In the event of such an event, the US and world economies will crumble.
· In such an event, martial law will be declared, civil rights suspended, curfews set up, guns confiscated, Homeland Security Office will have complete dictatorial powers, American citizens who protest will be labeled terrorist and arrested. Congress recently passed a law empowering the military to arrest and detain indefinitely anyone labeled a “terrorist” on US soil. This includes US citizens. The law is called National Defense Authorization Act (NDAA). "By signing this defense spending bill, President Obama will go down in history as the president who enshrined indefinite detention without trial in U.S. law," said Kenneth Roth, executive director of Human Rights Watch.
· 20,000 US troops have been trained to deal specifically with economic collapse and civil unrest and ready to be deployed in the US. Detention camps have been erected throughout the US and are ready for use.

WAR
· War with Iran is a very high possibility in 2012. The US and Europe have tightened the economic noose around Tehran recently. Iran has responded by sending warships into the Strait of Hormuz and threatening to close it. This would stop the flow of all oil from the Middle East from that region. Price of gasoline would rise to unprecedented heights and throw the West into economic chaos. The US and Europe have declared that would be an act of war. Iranian gun boats are currently harassing US warships in that region. The US has sent Tehran a dire warning not to close the Straits or the US will use all military options available.
· US troops being removed from Iraq are being deployed along the Syrian border in Jordan. Syria has mounted poison gas on its missiles and has distributed gas masks to its citizens. In January 2012 a Russian ship loaded with weapons unloaded its cargo in Syria. The US and Israel are gravely concerned.
· Iran has sent ships into the Mediterranean Sea. Israel has responded by sending two submarines laden with nuclear missiles near the coast of Iran.
· Iran claims to have 150,000 missiles aimed at Israel. 70,000 rockets in Southern Lebanon and thousands of rockets in Gaza are aimed at Israel.
· Iran will have five atomic bombs by April 2012. Israel has vowed to stop Iran from becoming nuclear. Two Iranian nuclear sites have been mysteriously destroyed recently and several Iranian nuclear scientists have been assassinated.
· Should Syria fall to the “Arab Spring” protest, the Islamic Brotherhood (a radical Islamic group vowing to destroy Israel) will have a unified front against Israel from Algeria to Syria. It will in effect recreate the Islamic Caliphate or Islamic Nation and completely surround Israel.
· Israel recently distributed 6 million gas masks to its citizens.

SIGNS IN THE HEAVENS

· 2012 is predicted to be a year of tremendous climate upheavals. NASA is warning of unprecedented solar flares which could destroy the nation’s power grid and plunging it back into the 19th century. Satellites, computers, cars, ATMS, cellphone, and all electronic devises would be destroyed. Mass transportation would be shut down, food distribution to markets impossible resulting in food shortages and mass panic. Martial law would be declared. If the solar flares are severe enough, it could pollute the nation’s water supply (radiation poisoning). The current US administration has done little to nothing to prepare the nation for the predicted immense solar flares.
· Scientists fear that the nation’s biggest fault line is coming to life. The New Madrid Fault line, which in the past caused the Mississippi River to flow backwards and change its course, is becoming increasingly active. Should a large quake occur along the fault, which extends from Arkansas to Lake Michigan, the nation would suffer severe damage and untold death. Recently, 500 earthquakes were recorded in Arkansas in a short time.
· Scientists are alarmed at the increasing volcanic activity in the Yellowstone Park – the nation’s super volcano. Pressure from its massive magma chamber has caused the ground to rise 9 inches in areas of the park. Temperature of Lake Yellowstone has risen from 60 degrees to the 80’s. Toxic gases are being released in many areas of the park. Recently, thousands of animals were found dead throughout Yellowstone. Many areas of the park have been closed due to toxic fumes and new hot vents. Scientist fear that this super volcano could erupt. It would destroy six states and blanket much of the nation with volcanic ash. This would effectively destroy the United States’ super power status and regulate it to a minor player in world affairs.
· Tens of thousands of birds and fish are mysteriously dying throughout the US. Scientists are at a loss to explain.
Posted by Gene at 9:11 AM