I heard the Lord say this morning, "You cannot Winnow without Wind" 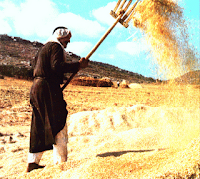 Most people in urbanized America don't know what winnowing is.  They think they do, sorta.  As one person said in a Bible Study, "I think I know what wheat is, but I don't know what a winnowing fork is".  This in response to the passage where John the Baptist speaks of Jesus:  "He will baptize you with the Holy Spirit and with fire. His winnowing fork is in his hand to clear his threshing floor and to gather the wheat into his barn, but he will burn up the chaff with unquenchable fire.”  Luke 3:16b-17.

Since we have a dearth of knowledge about things agricultural there are a few things we need to know in order to grasp the critical truth of this passage.  I got this from the Lord early this morning.  It is the result of a spirited discussion I was having with a man who is exploring the things of God and believes he has cornered the truth.  I was trying to help him see that much of what he believes is absolute truth so much chaff.  Many people have strongholds that have been erected against the knowledge of God.  They are not all sin based.  Some are traditions, theologies, beliefs and doctrine that have trampled underfoot the shed blood of Jesus.  Certitude is the enemy of Faith.

The Lord said to me, "You cannot winnow without wind".  I love when He speaks in a simple word like that.  It all became clear in a split second.

I grew up in windy North Dakota.  I was a farm kid.  We grew wheat.  We used machines to combine and separate the wheat from the chaff.  Sometimes our machines didn't do very well and we ended up with a lot of chaff in the wheat.  When the wind was blowing, We would take a scoop shovel of dirty wheat, throw it up in the windy atmosphere and watch the wind do it's thing.  What came back to earth was clean; wheat alone.  The chaff was gone with the wind.

Back in Jesus day, they didn't have harvest machines.  The wheat, straw, and everything was gathered from the field.  Shocks of wheat.  Bundles.  Then they were brought to the threshing floor.  Either an animal would tread on the wheat to crush it out of it's head (Ox perhaps) or someone with a blunt instrument would beat the wheat heads until the grains would release and fall to the floor.  The result was you then had wheat and chaff (including stubble) laying on the floor.  Mixed.  Not yet good for making bread.

IF the wind would come up of sufficient velocity the farmer would take a fork designed to lift and throw the chaff and wheat from the threshing floor up into the air.  The steady wind would blow away the chaff leaving only the clean wheat on the floor ready for storage in the barn.  It was only that which was useful.  It was only that which could be made into bread that would sustain life.

This process would accumulate a pile of chaff and stubble near the threshing floor.  It had no value.  It was actually an eyesore and presented a danger.  If the wind stirred around it could re infiltrate the cleaned wheat on the ground.  So, once it was separated it was burned to avoid this re pollution.

I explain all this in detail because the spiritual truth in it is profound.  Look at what John the Baptizer said, he said Jesus would come to baptize with the Holy Ghost and with Fire. A thresher man winnows with the wind and the useless chaff is quickly burned up in fire.  The metaphor is made.

This verse has often been interpreted to talk of believers and unbelievers.  It of course can be applied that way somewhat, but the Holy Ghost didn't come to condemn people to eternal fire.  It came to blow away false doctrine, chaff like beliefs and the traditions of men.  John the Baptizer also talked of how the Axe was already laid to the root of the tree.  That was also about cutting away false traditions, not about killing trees.

Here's the difficult truth.  You can't separate the wheat from the chaff without wind.  You can't discern empty theology and beliefs without the wind of the Holy Spirit.  The Mighty Rushing wind at Pentecost swept away centuries of false belief systems.  He is still doing his winnowing work today in the lives of men.  We are suffering under the oppression of false belief systems that are strongholds erected by the enemy to keep us from the knowledge of God.  It is insidious.  Properly applied wind can tear them down.  Late last night the wind blew thru.  It was so intense that the doors of our house shook from the change of pressure.  Stronghold shaking wind.

Yet, many churches keep trying to teach and preach to develop pure wheat in their people without the power of the Holy Spirit.  They are stuck on a windless threshing floor going thru the motions of tossing up the wheat and chaff together and ending up with the same wheat and chaff on the floor after it's all done.  Lots of effort, no results.

Powerless preaching means the chaff remains.  No wind no wheat.

What does the wind look and sound like? You can't see it. You can't describe it. You might hear it's sound. But scripture says that even if you don't see it, you can still see it's effect.


"The wind blows wherever it pleases. You hear its sound, but you cannot tell where it comes from or where it is going. So it is with everyone born of the Spirit."  John 3:8


When worship is pure and powerful, when the prophetic word blows thru a place and sets things in order, when the evangelist comes to stir up and release Holy Ghost power of conviction and repentance, when healings, deliverance, restoration happens, demons are are cast out, dead people are raised, people cleansed and hearts turned from stone to flesh.  Those are the effects of the wind blowing.  If that's not happening, chaff and wheat are still on the floor.

Everything you thought you know about God from your Sunday School class as a child, from your Bible College training, from your seminary, from the books you have read, from the sermons you have heard live, on the radio and on TV is subject to change.  The wheat will survive the wind. The chaff is blown away and burned.  IF you refuse to subject your personal theology to the Wind of the Spirit you will live in a useless wheat chaff mix, going thru the motions but never getting the pure grain you desire.

Your barns will remain empty.  You will starve to death.


Blow away everything that is NOT of YOU Lord.

This IS life-changing, and the Spirit has been talking to me about this very thing! May you be heard far and wide!!