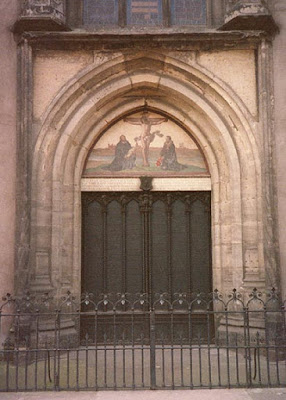 20 years ago, about the time the Berlin Wall was coming down, Peggy and I made a visit to the town of Wittenberg in Germany. The town where the 95 thesis were nailed to the door in 1517.

We visited Luther's home. We visited the church. It was Holy Ground as far as I was concerned.

It was not protected. I sat where Luther sat and had his table talks in his little home at the end of town. I sat in the room where he held chapel

Of course we saw other things that mattered.

While I was there I was overcome with a sense that the Mantle of Luther had not yet been picked up. Remember, this was shortly after the fall of ministers in 1986-7. Well before Pensacola and Toronto. I had not yet encountered supernatural other than in the walls of the church.

When I was all alone in the church, I stood on the spot where Luther's body lies. I Sat down on the floor. During that time I asked the Lord to give me a mantle of Martin Luther. Of discernment. Of reformation. Of passion. Of clarity. Of discontent with the status quo of the Church.

I can't say what did or did not happen but every reformation day when it comes around I think of that October day in Wittenberg when we visited those places. It's become a precious memory.

People wonder why I have affection for the Lutheran Church. I don't for what I consider dead works, but I have hope that once more a spirit of reformation will return to the fellowship that bears his moniker. I have often said that if Luther were alive today he wouldn't be Lutheran at least as it is practiced in many churches.

I believe that as Pastor said today, that the Reformation on that day in 1517 is the most important date since the day of Pentecost.

Thank God for Martin Luther and I hope somehow I carry a portion of his Mantle today. I hope we all do.
Posted by Gene at 6:32 PM