Workers in Christchurch NZ had to CLING to the CROSS during the recent earthquake...Something prophetic in all that..NO? 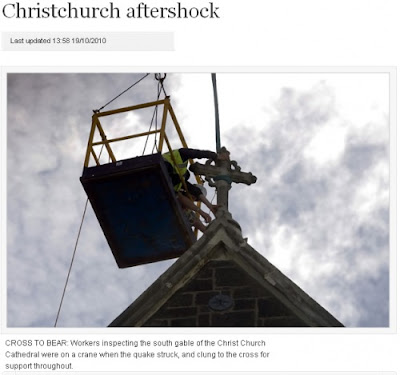 A nice story but the cross was being taken down because it was unsafe. If they had not been held up by the crown and had just clung to cross, they would have fallen. What is the prophetic meaning of an unsafe cross.

The irony is that some of the most severe damage was done to church buildings. The front fell off the largest Baptist church. What is the meaning of that?

That particular aftershock was particularly nasty. I was at my work on the second floor in a meeting room that looked out on the concrete block wall of the adjacent building, about three away. We looked out the window and the wall seemed to be moving about ten inches from side to side. Then we realized that concrete blocks were rigid and it was our building that that was moving.

Everything that can be will be and even some things we think are holy are shaken.

In that time of shaking, the basic instruction is "here, hold this". Hold this up.

There is always a potential for falling, and in a time of shaking and holding on the potential increases.

Probably not profoundly prophetic, but worth considering.

The message, to me, from this posting, and the subsequent comments, is that things are never what they seem. Take the obvious, first glance conclusions from the majority of those commenting from 'afar' and the exact opposite of outside presumption is probably the most truthful observation of what actually happened.

In reality, the cross was the unstable thing, and the building beneath your own feet was not stable either, though at first it seemed it was stable, and the other building was not.

Also, I tend to think in times of shaking we are being told to let go, not hold on...I suppose it all depends on how you look at what is being 'held' onto?

Scriptures are quite clear that we must not cling to symbols, to buildings, to presumptions and judgments, to appearances, to traditions, to our job security, to our religions, our families, and all other forms of graven imagery and idolatry--good 'holy' as you said, that they may seem--they can never be stable-- rather cling to that which holds all things in place; and judges all things just--- cling/hold only to Him, the wearer of the Everlasting Crown and turn from/let go of worthless idols. Be careful, also, with the judgments and presumptions that we all love to make against one another, from all sides! Search for mutual understanding--don't settle for 'agreeing to disagreeing', continually splitting the body of Christ into more and more divisions, keep
going back to the Scriptures until all can agree, encouraging one another--not dismissing each other.

None of which is a 'new' message, but an old one spoken by the prophets; and The King.