Only a seared Conscience will allow a Christian to remain blind

I think a lot about Nazi Germany. My heritage. How people could have allowed such evil to manifest without much visible argument. How people of good "christian" faith could have overwhelmingly voted in a man who was open about his despising of the very foundations those who voted him in stood for.

As he seized more and more power, as he implemented policies and strategies to solidify that power the crowds only grew. Sieg Heil they said. They would go to the rallies, torch parades and then go home to gather their family to teach them the charlatanism. Even the Catholic church leaders were part of this. Here's disturbing pictures of Catholic leaders saluting Hitler. These "spiritual" leaders paved the way for a tragic future and the collapse of Germany at the end of the war. 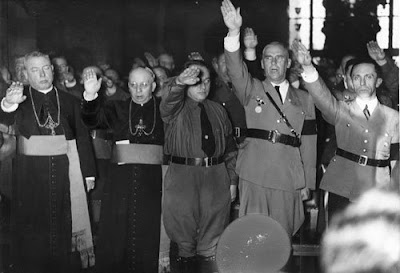 Even today if you get inside some German households, particularly older people, they will defend those days, "Hitler hat recht" Hitler did a lot of things right. The hero worship is still strong.

I wonder if there was ever a time when the true Christians of Germany came to a watershed moment, when the had the chance at the ballot box to reverse the curse that was coming on them, if they had a tipping point that tipped not for freedom but for tyranny? 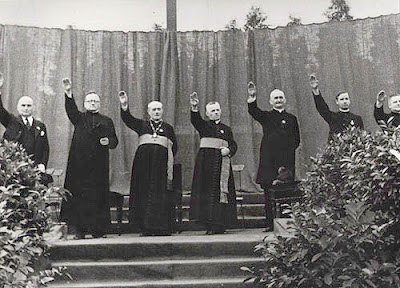 What did Hitler do that caused people to ignore their righteous judgement and allow evil to manifest? He was a powerful speaker. Well rehearsed. No spontaneity. He practiced and practiced. He was a charismatic figure manufactured by the press who loved him. He represented change. Against the big money "Jews". He offered free health care to all. He told people that there would be great sacrifice but that they could buy into a dream and a future where things would be controlled by a race, a master race.

Even when Hitler began killing deformed and invalid babies after birth, even when mentally ill people were rampantly euthanized, old people put to death and any political opposition crushed by incarceration in concentration camps, people still supported him. The euphoria was rampant. When Hitler showed up, people were proud of their racial identity. I am GERMAN. Women fainted in his presence. Many confessed to wanting to bear his children. He was in his Aryan way very attractive, even sexy.

Yet he took the nation further down into perdition than anyone might have imagined and he did it with the full permission of the population. Those who would ultimately be most abused, most penalized by his despotism voted for him happily.

What does this have to do with the prophetic? I am watching this happen once again. I was alive when Hitler lived. A baby of course, but the timeline means I recall well as a youth the years shortly after the war. Adolph Eichmann. The concentration camps of death.

We are now at a tipping point of history in this nation. The culture, even many good "christians" and "christian leaders" are embracing the direction this nation is headed under leadership that is taking us places we never imagined as a nation we would go. Directly and passively we have as so called believers in Jesus allowed to manifest in so many evil ways.
The recklessness of mindless economic intervention is what ultimately caused the German economy to collapse. Hitler kept spending money he didn't have to drive a war effort that couldn't sustain. The people suffered the most. There was nothing left as he sucked all the air out of the economy to drive his insane plans. The very people that voted for him were the ones who were hurt the most as the collapse came.

We are there once again. I don't care what name you put on all this. Bush. Obama. It's a trend-line that accelerated toward the end of the Clinton Administration. It is growing worse and worse. Unless we do something to reverse the curse of corruption and evil we are headed down a worse path.

Don't bother voting a party. Look at the list of evils in our nation and without thinking about sports and entertainment, who supports and who apposes this by their action, by they way they vote, the way they live their lives, the policies they implement, who is the person I can vote for who will bring us back from the brink of evil? No matter how wonderful he seems, the proof is in the pudding. I don't care who prays for or with him. Many executioners prayed before burning "heretics" at the stake.

If you vote your party, your religion, your race, your celebrity endorsement, your ball team that is what it means to Vote blindly. Just like they did 80 years ago in Germany.

I am a watchman. This is the gathering storm on the horizon. Who will hear the watchman's call?
Posted by Gene at 7:26 AM

iam from Germany.Europa is on the same way done the hill