When the World Recognizes a "Coincidence" 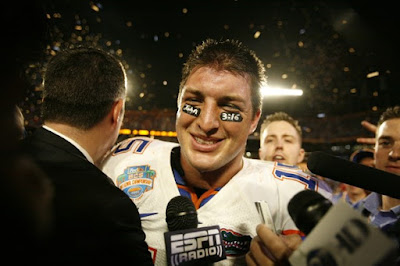 The Denver Broncos’ playoff win over the Pittsburgh Steelers on Sunday night was unlikely enough, but Tim Tebow’s passing yardage — the Christian quarterback threw 316 yards — sent commentators over the edge. The Associated Press reported that he also averaged 31.6 yards per completion. The religious connotations to John 3:16, a famous Bible verse, were too much for many to chalk up to chance.

For the true believers, it was no coincidence.

Read the whole thing, it may not be prophetic, but it's worthwhile.
Posted by Gene at 7:55 AM

Who says God doesn't have a sense of humor, lol. God using football to show himself. God bless Tebow.