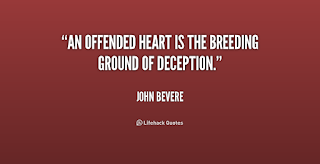 I know that it is hurtful to some, but when a person takes offense at everything, everyone, is hurt easily, holds resentment and is so thin skinned that everyone walks on eggshells around them.. you have a person who has been formed by demonic activity.

I am not saying that they are possessed, I am not saying they aren't saved and headed for heaven. They just will never be of much use for the Kingdom on this earth. They carry a chip on their shoulder, a grudge in their pocket and a chain of remembered and imagined wrongs done them in the past.

What is sad is some of these people at one time were mighty in the kingdom.  They were powerful. They had destiny.  YET.. today they have been sidelined by the enemy who devoured them.. he looked for someone, opened his mouth and consumed them by having them consumed with anger.

When you see people oppressed of the devil, they are a pitiful bunch.  What makes it worse it the offended person sees being set aside as further offense.  So it compounds.

It is from this platform that the enemy feeds deception into a person, a group, a subculture that becomes a meme of lies which cause them to become even more displaced, disused and discarded.

Be careful of offense.  It is a demon.  You may need to be delivered of it.  The offended person has lost their love..


4Love is patient and kind. Love is not jealous or boastful or proud 5or rude. It does not demand its own way. It is not irritable, and it keeps no record of being wronged. 6It does not rejoice about injustice but rejoices whenever the truth wins out. 7Love never gives up, never loses faith, is always hopeful, and endures through every circumstance.

The opposite of this is true today, even among Christians:
We have a culture that has lost the ability to forgive and forget, is not patient or kind, is proud and rude, demanding it's own way.  It is easily irritated, remembering every slight.  It prides itself on injustice and rejects the truth.  It gives up easily, loses faith quickly, hopeless and easily defeated.

IF that isn't the work of satan.. I don't know what else he could do.  You only have to look at all the offenses that has caused riot and protest in the last few years to see the fruit of this.  And the reactions from others. Offense is of the devil himself.

Proverbs 19:11 Good sense makes one slow to anger, and it is his glory to overlook an offense.

Proverbs 18:19 A brother offended is more unyielding than a strong city, and quarreling is like the bars of a castle.

Ecclesiastes 7:21-22 Do not take to heart all the things that people say, lest you hear your servant cursing you. Your heart knows that many times you yourself have cursed others.

Proverbs 6:16-19 There are six things that the Lord hates, seven that are an abomination to him: haughty eyes, a lying tongue, and hands that shed innocent blood, a heart that devises wicked plans, feet that make haste to run to evil, a false witness who breathes out lies, and one who sows discord among brothers.

One thing is for certain.. JESUS was really offensive to one group of people.. the Pharisees.  They crucified him. That same demonic spirit is alive today.

Get over your offense, take back your life.  This word is for someone today.
Posted by Gene at 9:57 AM

awesome post! you actually answered some of my questions in your post that i have been wondering about for some time...i thank you for your insight and wisdom!
lol, and of course repented for any offense in me toward others...it's a scary thought that the enemy is that sneaky and can get an inroad like that.
thanks for the awakening thoughts...GBY!

This is a great word. Thank you.