Last Saturday Morning our men's group was treated to what I believe was the perfect example of how to give a testimony.  The man giving it is not a trained speaker although in listening to him I spotted real talent.

His name is Greg.  He is normally shy.  But he is deep. As a person who in Dale Carnegie trained over thousand people in Public Speaking from 1975-1985 and who assisted in the training of several hundred more from the time I first took the course in 1970, It changed my life and gave me deep appreciation for good platform presence and presentation.   It also painful when it's not.

If you are ever called on to give the perfect testimony as Greg did here are some tips (How he did it).

He constructed his talk thus:

He began with genuine and sincere appreciation for being allowed to talk.  Gave accolades all around. Made people feel comfortable.

Then he stated the premise of his talk at the beginning. "How God Shows Up in the Little things".

He offered 3 clear simple personal examples. Not long, but clear and with drama.  The Exemplar Doce.... "The example makes it clear".

The stories didn't make Greg the hero.. it made him the recipient of God's grace.   We were right there with him.

He shared with a story how he came from simple churchianity to a profound encounter with the Holy.  How putting aside precincievd ideas led him to better truth.

He shared 4 different Biblical references.  Not to support his thesis, but to show how the Word helps reveal who God is and what that means to him.  Very personal and transparent.  He continually focused on the attributes of the Father.  So when he read and referred to these few passages, he did so with reverence and deep personal application.  A side note, most people that try to do this will hammer too many Bible references and use it to support their point. It is a sign of poor preparation and understanding.

As he came to the end of his talk he carefully developed three points (challenges) for us all.  He asked the questions carefully but without accusation.  Greg is soft spoken but you could have heard a pin drop during his whole presentation.

As a trainer of many great speakers and too many not so great, when it is done well it is a joy to behold.  If you were there Saturday Morning, you saw it done right.  Now go and do likelwise.

Say Less Better.  Stop before you are done.  Don't talk in circles.

I wish many more would hear what Greg shared.. and maybe someday will.  Don't lose that number Greg.. you have a real gift. 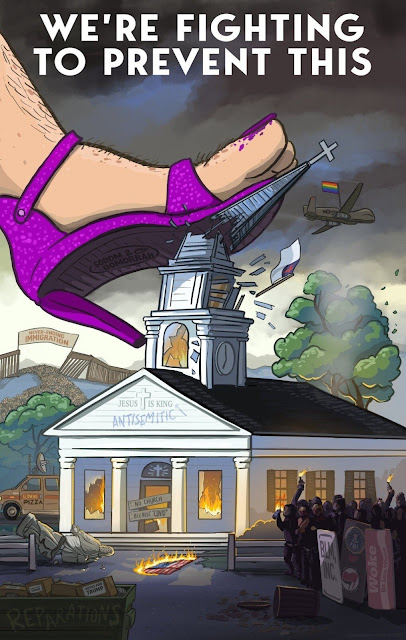 The Equality Act that is pending in the Senate is a jackboot against Christianity.  This image says much about the anti-christ spirit in our Government .

Over the past few months facing unknown and knowing it might end, I have noticed--

The Sky is bluer

The air is fresher

The wind is bracing

Urges of a new year.

The hopes of tomrrow and the promises of eternity found.

The joy in the wife of my youth

It becomes a beautiful pattern that resists the tearing.  This life is a gift.  Every hour.  Every day.  Every minute. Every second.

Oh that my eyes would have been opened this wide before.. but they are now wide open and alive

A couple nights ago in a Prayer Meeting one of the men had a word of knowledge that someone was having heart issues.   I have suffered from very high Blood Pressure for a long time.  Medicate for it. It just is that it didn't seem to be getting better.  And there are other risk factors.

I raised my hand and said, "That would be me".  They prayed for me.  They spoke life and for the first time in a long time I supernatural peace come over me.  The potential to not wake up in the morning has been with me for a while.

I had an appointment with my Doctor yesterday.  She tested me, examined me and and proclaimed that my Blood Pressure was near normal and consisteant.  In an  hours appointment she checked it several times.  Both arms.  All returned to normal.

This was no fluke.  This was one of those times when you know that you know.

Father God's Plan for You

The last couple weeks have placed me in situations where Father has made use of me.  I didn't plan it.  I didn't ask for it. I was just there and suddenly he made me aware of my purpose.

A client I was supposed to meet lost his wife the day before we were to get together.  He chose to meet anyway.  During that time in an hour and a half with him, we talked of his loss. Wife of 52 years.

It is something that happens more than I can tell.  Placed in the middle of situations where I operate more as a counselor than as anything else.

Father seems to have a plan.  And he uses me.

He uses everybody.  He has a plan to use your to be his hands, feet, voice and compassion in the world.  Only be willing to be used.

I had not heard.  I always admired Ravi Zacharias.   His intellect was unsurpassed.

Yet he had a flaw.

I have seen this before.  Some people who are powerfully influential that carry great truth and wisdom yet be tragically flawed.

Separation of the man and his message seems to be difficult.

So by his character flaws we are deprived of his wisdom.

This is a reason for all of us to live wisely and clean.